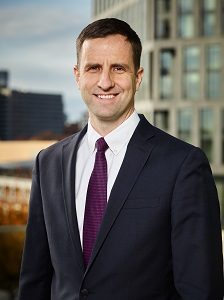 Paul has been practicing law for over 17 years. His areas of focus are in criminal and traffic defense and civil litigation (domestic relations, personal injury). In his criminal practice, he has experience handling serious felony charges (involving the potential of life imprisonment) and also has ample experience in traffic and criminal misdemeanors, having litigated over 2,500 cases.   Paul is in court nearly every day on civil and criminal matters. Paul has also handled appeals before the Virginia Court of Appeals and Virginia Supreme Court.

Paul has a peer review rating of “AV” from Martindale-Hubbell, the highest peer rating an attorney can obtain.  He also has an superb AVVO rating of 10 out of 10, a rating that reflects his exceptional reputation and experience as an attorney.  Moreover, Paul has also been selected to the Top 100 Trial Lawyers for Criminal Defense by The National Trial Lawyers and was also selected to 2020 Virginia Super Lawyers.

Beyond the law, Paul enjoys performing in a local band and recording music. Paul and his wife Sarah live in Fairfax with their five children.

“Paul Mickelsen was my divorce lawyer.  I knew Paul before I needed a divorce lawyer and I knew he had a great reputation in the legal community.  When my wife filed for divorce, Paul was the first person I called.  Divorce is very difficult but I am glad he was able to help me through the process.  Paul is compassionate and a good listener.  I never felt rushed when I was with Paul and I knew he cared about me and my children.  I always felt important.  He treated me like a person not a number.  Paul is smart and knows family law well.  My case was not an easy case but Paul was able to negotiate a decent settlement with the other side.  He’s very professional: he was never late to a meeting and returned all my calls in a timely manner.  I would strongly recommend Paul to anyone going through a divorce.”

“I faced two DWI cases- one in Fairfax and another later in Arlington. In both cases Paul represented me very strongly and I was found completely NOT GUILTY of both DWI cases. Paul is not a lawyer quick to accept a plea bargain. If he sees that the prosecution has a weak case, he will advise you and is quick to take it to the judge. Paul showed genuine concern for my personal well-being and genuinely fights hard in court”.

That day I was so excited about the result that I couldn’t even thank you properly. Thanks a million for the great defense you did!  You are so successful in your career and you have a strong work ethic. You had already received your money and there was no need to try that hard (as I had this bad experience with my previous lawyer) but you did your best…

I was so nervous at first, but believe me when you started to talk in the courtroom, I realized that the outcome is not going to be as bad as we thought, then I smiled to my mom with confidence to relax her.

I watched your defense with enthusiasm to the extent that in some points I even forgot the reason I was there!

Paul, I will introduce you to my friends and relatives and whoever needs the best lawyer ever.

“I am writing this to express my sincere thanks to Paul Mickelsen for representing me in three different cases with satisfying results.  He also made it seem like he really wanted the best for me.”

“My experience with Paul as my attorney was exceptional.  His advice was top-notch, and he came prepared to zealously argue my case.  I am convinced that it was because he represented me that I was able to win my case.  He saved me from years of headaches down the road; I will be forever grateful for that.”

“Paul handled both of my cases with skill and sound judgment.  I highly recommend Paul Mickelsen”

“Paul Mickelsen is a well-known and respected lawyer in this Northern Virginia region.  He was actually referred to me by a friend of mine who was also a former client of Mr. Mickelsen and helped him with his gun charges.  He also worked with me on my perjury case; very skilled and helpful lawyer.”

“Last year I was facing a serious DWI case.  I was searching everywhere for a good lawyer.  I simply hoped they would help reduce any possible charges I’d be confronted with at court.  Paul did not only represent me, but exceeded my expectations and I was found not guilty!  I’m so grateful for getting a great lawyer like Paul.  Paul is truly one of the best at what he does.”

“Fantastic lawyer and also reasonably priced! He is extremely knowledgeable, confident, and just a overall nice guy. He made me feel comfortable and confident about my case. The end result is that he got my case completely dismissed!! I will definitely be using him again with ANY legal matter or questions that may experience again.”